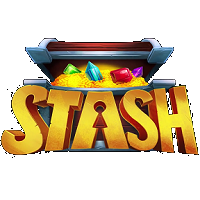 Stash is bringing the magic back to MMOs! With turn based combat, customizable housing as a core feature, a unique tabletop art style, and more loot than you can fit in a portable hole, Stash delivers a fun, engaging experience.

Stash, or Stash: No Loot Left Behind, is a game created and developed by Frogdice, which is focused on bringing the magic back to MMORPGs. Stash RPG features turn-based combat, awesome housing, and a fantasy world that will become your second home. It is a multiplayer online game in a persistent world. You can group up with friends to adventure through the world, plunder dungeons, defeat bosses, or just be social.

Nearly every feature in Stash is designed in some way to promote co-op play and competition. You can also play Stash solo whenever you deem fit. This is "playing alone, together" since you still benefit from the presence of other players even while soloing. You can trade with them, share buffs, or just socialize!

Warrior: Masters of arms and armor, these juggernauts of melee wade into battle without fear or hesitation. They control the flow of battle by taunting enemies, protecting allies, and sundering foes. Primary role: Tank + Damage.

Healer: Adept at manipulating the energies of life, healers mend and buff their allies while mesmerizing and confusing their opponents. Primary role: Heal + Buff + Crowd Control.

Elementalist: These magi manipulate the basic elements of the world in mystical and magical ways. Earth, air, fire, and water all answer to their call. Primary role: Damage + Crowd Control.

Hunter: Agility, quick wits, and terrifying precision are the hallmarks of the hunter. In addition to their potent attacks, they have a diverse set of utility skills and the ability to confound and debuff their enemies. Primary role: Damage + Utility + Debuff.

Human: Known for their versatility and adaptability, they populate all the regions of the world. Humans come in all shapes, colors, and forms.

Dryad: A mysterious race of women, dryads hail from the ancient forests of the world. They carry the beauty of nature with them wherever they roam.

Trulloc: With their stone-like skin, trullocs call the mountains and deepest regions of the world home. The texture of their skin reflects the variety of the earth.

Lukoi: Much like their canine cousins, the lukoi exihibit a wide variety of appearances. They fight with determination, fierceness, loyalty and unbridled joy.

Catfolk: Sleek and powerful, catfolk prowl the land seeking mystery and adventure. Their feline appearances span a range of color.

Turn based, tactical, grid combat is a core feature of Stash. Inspired from classic Dungeons and Dragons tabletop gaming, Warhammer miniature gaming, the "Gold Box" AD&D video games, Baldur's Gate, Planescape: Torment, Temple of Elemental Evil, Bard's Tale, and a variety of other turn based RPGs. Stash has a combat system that is approachable yet deep. The more you play, the more layers you will uncover.

Stash combat is incredibly fun. Figuring out ways to lure monsters into choke points and cleverly utilize your class abilities makes every battle different and exciting in its own ways.

Everybody loves looting. Stash has loot - and lots of it! Some of it will be incredibly useful, and some of it you'll toss in your junk trunk for fast and easy selling. You can use it yourself, trade it with other players, break it down for crafting, sell it on the market, sell it to NPCs, or stash it in your Base of Operations (BOO).

Weapons, armor, clothing, magical items, legendary items, crafting materials, decorations and pets are among the types of loot you will find.

Base of Operations[edit | edit source]

Every player in the game has a Base of Operations, or your BOO, abbreviated. It starts off as a meager bedroll, but you can steadily upgrade it to a tent, a hut, a house, a mansion, all the way up to an impressive castle. You can decorate and design it both indoors and outdoors. The customization options are almost limitless.

Your BOO also serves as your stash. It is where you send back your treasures and show off your trophies. It is also where you build useable structures to craft or just entertain yourself (and your friends).

The BOO is one of the most important features of the game. It provides you with a tremendous creative opportunity while also being incredibly useful.

Stash RPG has a huge, tile based world map to explore with your character's figurine (a “peg” for short, hence a Peg Base) on the map. Ever played tabletop games? The world view is like a game board in tabletop or miniature gaming. This makes world travel faster, less confusing and more convenient. It is harder to get lost than in most MMOs.

As you explore the world you will find “Points of Interest” : dungeons, caves, mines, towers, fortresses, camps, etc. You can interact with a Point of Interest (POI) to enter it and explore in greater detail. Dungeon is a Points of Interest that have some type of adventure within. Dungeons are where you will find monsters, bosses, exciting and dangerous activities.

World Dungeons: designed by hand for a specific purpose. These dungeons generally have a lore or story reason for their existence.

Once you learn a profession from a craftmaster in Askagard City, you can build the proper structure in your Base of Operations (BOO) (stove, forge, workbench, etc.) and get to work! Crafting materials can be harvested in the world, created by breaking down items, bought on the market or grown and processed.

The crafting process in Stash is its own special mini feature that is far more interesting and fun than just clicking buttons and watching progress bars for hours on end. If you wish to create masterpiece items suitable for competition, your performance in crafting determines how marvellous your creations will be.

Once you get your start with some basic materials and structures in your BOO, you could theoretically never leave civilization. You could focus all your play on your BOO, crafting, and selling items on the market.

Clans are a social and political feature of Stash. Players can join together to form a Clan, establish themes of their choosing, and compete with other Clans for prestige. As your Clan will gain levels, the Clan's shop will stock unique paraphernalia to supply the Clan Bonfire and other events. The Clan stash is a planned feature.